Here's the planned 1.0 feature set for the mobile app, in case you're wondering:

We're making rapid progress on the iOS version, but I won't commit to a release date yet. smile emoticon

We've started work on TroopTrack Mobile for iOS. Here are a few screenshots of what we've done so far.

We pushed an update this morning with lots of minor tweaks and bug fixes:
- Support for long check numbers in money transactions
- Include all family member money accounts in the newsletter, not just youth
- Only show recent advancement progress for youth, not youth and adults in the newsletter
- Limit the amount of info displayed about an event in the newsletter
- Fix a bug preventing Trail Life USA Point Men from accessing Point Man Tools if they aren't in a troop
- Access to the Trail Life badge book store and Leader Pages for Point Men who aren't in a troop

We have also created an API for integrating with TroopTrack. We are going to be using this API as part of our development of a mobile app, but if you are a developer and have an interest in using the API to do something cool, contact me.

Have you ever wanted to see who had perfect attendance at your meetings or campouts? With the new summary view of the participation book, GOING LIVE RIGHT NOW, it's a breeze.

All you need to do is go to the participation book (Plan -> Participation Book), then filter by event type, add a date range if you want and click search. Then click on the "Summary" button to see a summary of your results.

Check out the screen shot below to see the results. 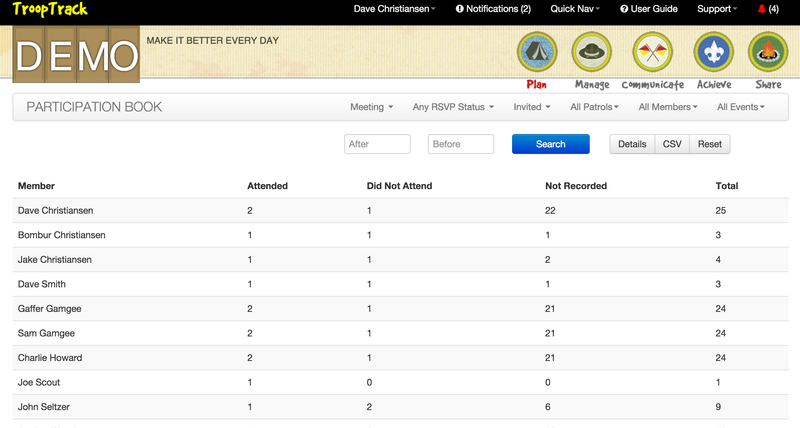 Adding new members is easier than ever thanks to our latest enhancement. Now you can choose between adding youth, adults, and leaders when you add a member (see screenshot below). We will add sensible privileges to leaders automatically and you will be able to choose specialized privileges (admin, treasurer, or advancement) which will expand their privileges further. 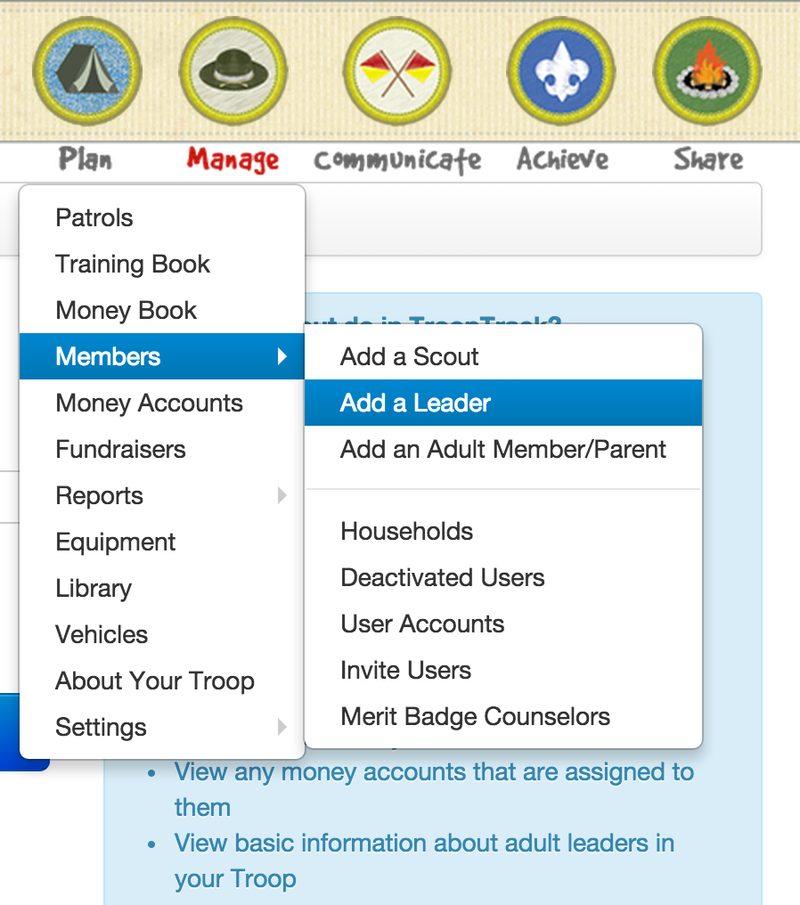 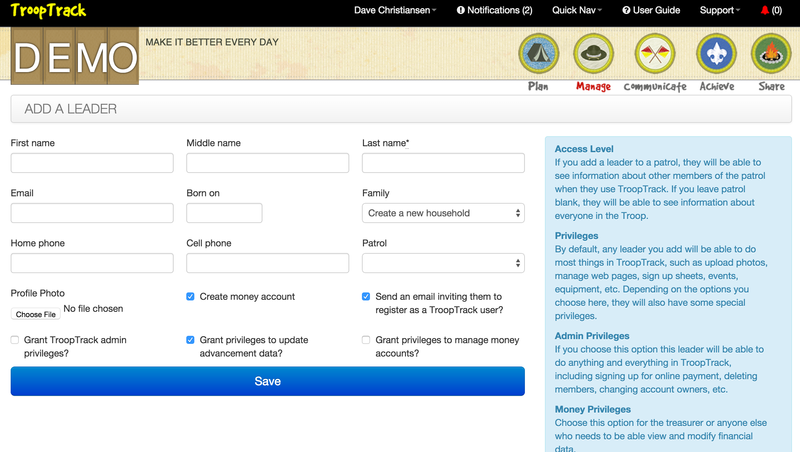 This morning we added an important new feature: paying for event fees with credit cards. To turn it on, go to Manage -> Settings -> Online Payments. Then do this:
1) Click on the "Turn ON" button for allowing credit card payments.
2) Click the "Change" button next to the Credit Card Provider setting.
3) Choose "Stripe"
4) Set up your Stripe account 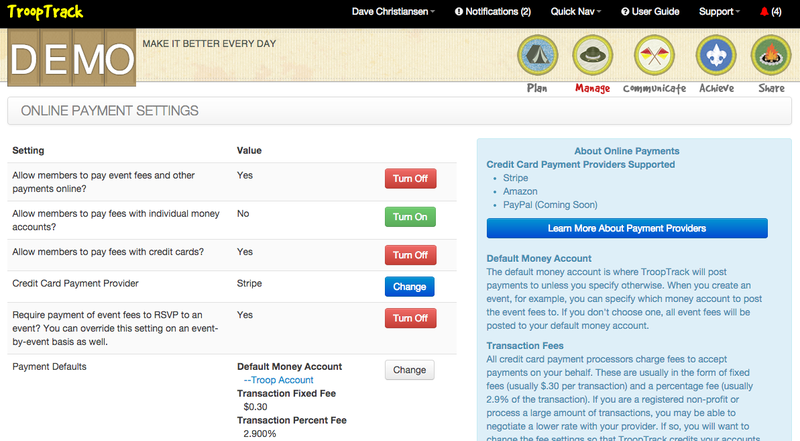 I recommend you also require payment to RSVP. You can override it for specific events, but it will make it easier to collect payment for events because members won't be able to RSVP without paying. When you create a more expensive event (like summer camp or high adventure) you can turn it off for just that event on the advanced tab of the event form.

If you have turned on the setting to allow paying for events from individual money accounts you will need to turn that off. We'll update this feature so you can use both simultaneously soon, but in the meantime you can only choose one.

A few important notes about this feature:

2) TroopTrack adds a 25 cent fee to each payment. This fee is non-refundable. 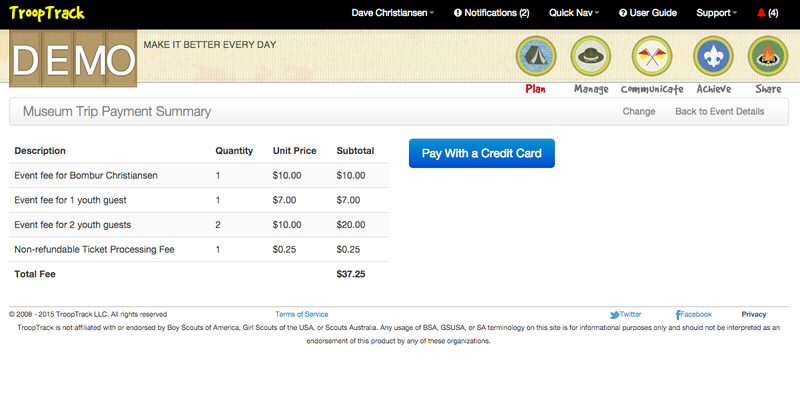 Happy New Year! Yesterday we released several nice improvements we hope you like.

1) Online payment settings. You can check them out by going to Manage -> Settings -> Online Payment. These new settings are not only less confusing than the giant troop settings form, they also give you some new capabilities:

3) The money and participation books now include a row totally the information shown.

5) We've updated the terms of service to clarify the confidentiality of data.

I've finished work on the ability to accept credit card payments for event fees. It will probably be released next Friday, pending internal review and testing. If you are interested in using this feature, you might want to set up your payment account with our payment processor, Stripe.com.

Part 1 of a multi-part re-design of event fees went live this morning. Here's what we did:

1) The "Use event accounting" setting will go away. All TroopTrack customers will have the opportunity to pay an event fee when they RSVP.

2) You will be able to designate any money account to receive event fees when you create an event.

5) We've added a new flag to money accounts to identify whether the account can be used to pay personal fees.

If you are currently using Amazon payments to let members deposit money into their accounts this capability is still available.

Please try it out and let us know what you think.

I am working on a feature that allows members to pay event fees when they RSVP for an event. Here are 9 important aspects of this new feature that I am interested in receiving feedback on:

1) The "Use event accounting" setting will go away. All TroopTrack customers will have the opportunity to pay an event fee when they RSVP.

2) You will be able to designate any money account to receive event fees when you create an event.

3) Users will be able to pay an event fee when they RSVP and will be able to choose from a variety of payment methods, including a money account they own, Amazon Payments (see 4), and Credit Card (see 5). We will probably add support for PayPal before too long.

4) Troops that wish to use Amazon Payments will need to sign up for an Amazon Payment account. There is already a setup wizard in TroopTrack to guide you through this process.

5) Troops that wish to accept credit cards will need to sign up for a Stripe account. We will provide a setup wizard to guide you through the process.

6) A 25 cent processing fee will be added to event fees when paying with Amazon Payments or Credit Card.

9) You will be able to add youth and adult guests when you RSVP for someone outside of your household.

I believe this will be a major improvement in the handling of event fees within TroopTrack. I hope you will agree with me.

I expect this new feature to go live before the end of the year.

This morning we released a new interactive book for collecting information about your finances called the money book. You can filter based on accounts, categories, and a date range. Just go to Manage -> Money Book to try it out. If you don't have any accounts the option won't appear.

I'm considering adding a "Summary" feature as well and am open to adding more filters. Just give it a shot and let us know what you think. 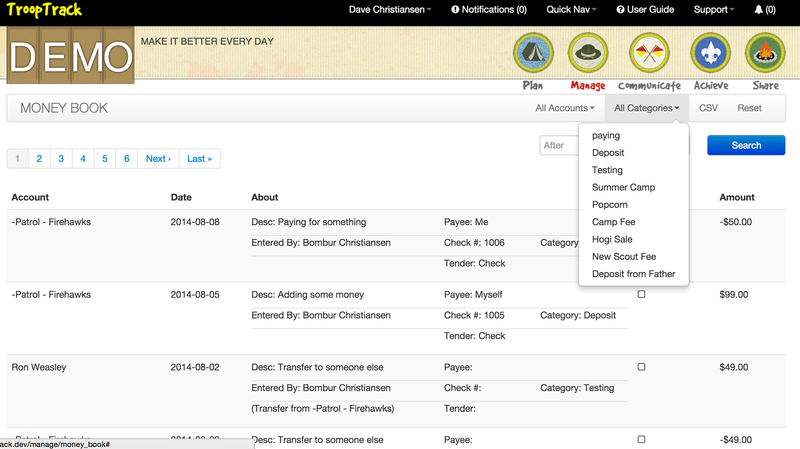 Check out the latest "book" feature - an interactive training book. Like the other "books" we've released lately, this is a simple tool for letting you choose what information about training you want to see. It's great for things like:
- getting a list of all the adults in your troop with YPT training
- getting a list of all the training a leader has had in the last year
- exporting all the training everyone in your troop has ever had so you can make a super fancy graph in Excel.

Have you ever needed to get a list of all the campouts a youth has ever been on? Or the number of service hours performed by a patrol/den/level? 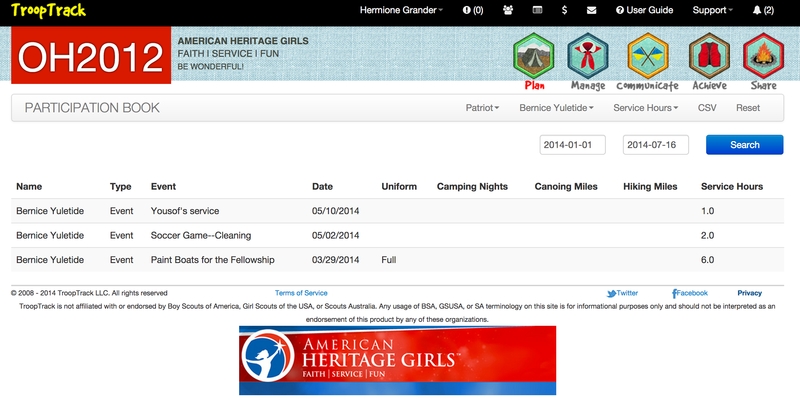 Several years ago we added the ability to restrict the use of mailing lists to a subset of recipients. The intent of this was to allow you to block out anyone who abused the lists without removing their ability to recieve emails sent to the list. This worked well, but it increased the burden of setting up the mailing lists, and in reality abuse of the lists was pretty rare.

This setting also can be used on magic mailing lists. 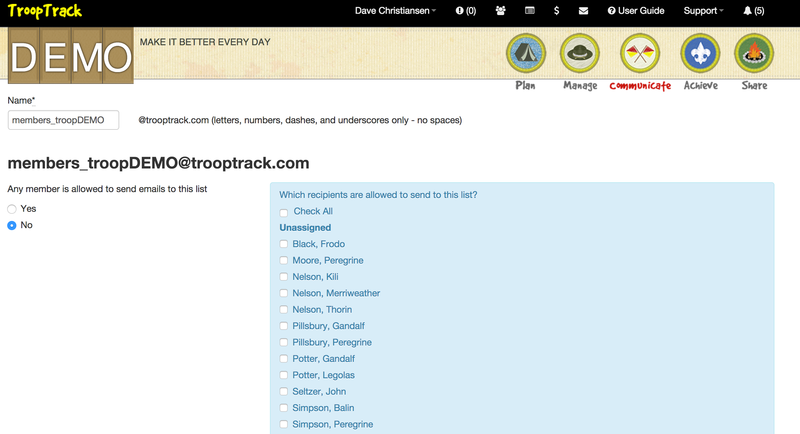 If you have the manage sign up sheets privilege you are now able to delete sign up items and to edit and delete all sign up sheets, not just your own.

Previously only people with the manage documents privilege could delete photos. This mean a user with the upload photos privilege could upload a photo but could not delete it if they wanted to. As of this morning, members with the upload photos privilege are able to delete photos they uploaded. This only applies to photos uploaded after November 30, 2014. Photos uploaded by that will still need to be deleted by someone with the manage documents privilege.

Have you ever uploaded a file to a user's profile and had it go back to the main user profile tab afterward? Or wanted to bookmark a particular tab on the profile? I have.

This morning I pushed an update to profiles that will make the tabs work better. You'll be able to refresh the page without it changing tabs on you, and I've updated the various actions you can take so that it brings you back to the right tab when you are don.

New feature for BSA troops - the ability to change the "reported on" field for ranks and merit badges so that you can force an update to council when you use TurboNET to create an advancement report. I'll add this for Packs soon.